Invasion of the Creeping Bellflower

Here’s a good piece of gardening advice. If someone says that they have a ginormous amount of a certain plant and they want to give you some, RUN AWAY. 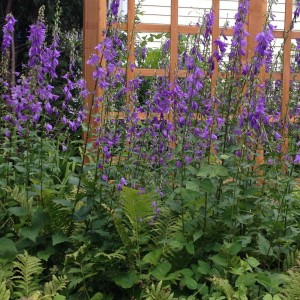 Yes, creeping bellflower is pretty. But it will also take over your garden.

With few exceptions, if a plant has taken over that person’s garden, it will take over yours too because it is evil—or invasive—whatever you want to call it. It doesn’t care. In fact, it may employ trickery to try to get you to take it home and plant it.

That’s definitely the case with creeping bellflower (Campanula rapunculoides). Even if you don’t know the name, you’ve probably noticed this horrible-to-the-core plant because it’s tall and showy with pretty purple bell-shaped flowers. It’s also everywhere that it can possibly get a foothold, especially this year because the plant likes moist soil and we’ve had so much rain.

Native to Europe, creeping bellflower was actually introduced to North America as a lovely new ornamental (I’m not sure when) and it quickly became popular with unsuspecting gardeners. In fact, I frequently see this plant on tables at plant sales or potted up and sitting on the sidewalk outside of people’s houses with a “Free” sign on it. (To be fair, it isn’t invasive everywhere like it is here in the Midwest.) The problem is, creeping bellflower has a very strong and extensive root system so it spreads quickly and will easily take over your garden and choke out other plants. 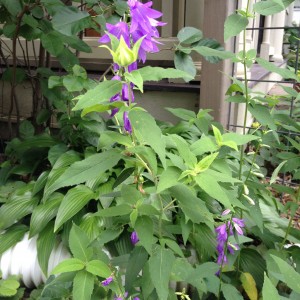 It’s also hard to get rid of. I’m not a big fan of chemicals, and they don’t work very well on bellflower anyway, so I’m going to explain two non-chemical ways to kill this miserable plant. Basically, you can dig it out or smother it. I often do some of both. No matter which way you go, it will take years to eradicate this flower-weed creature. Or, like me, you may just get to the point where it’s at least tamed enough that you can cope with ripping out a few of them each year.

When digging, the trick is to get as many roots as possible. Don’t just rip the plant out by its long stem—tempting as that may be. Creeping bellflower has both a thick, fleshy root that’s an inch or even several inches deep in the soil, and it also has a lot of thread-like little roots that grow horizontally just below the soil. If you only get the shallow horizontal roots, the evil-doing plant will just regrow from that deeper root in a short time. 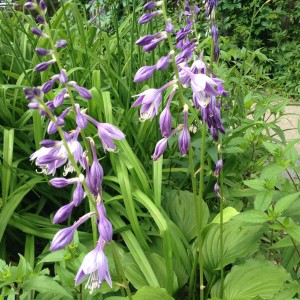 Well, wait. Let me take back what I just said about not ripping it out by the stem. If you just can’t bear to dig and dig, or actually have better things to do with your time, you can at least help slow down the spread of the plants by plucking them out of the ground by theirs stems because at least the little monsters won’t be able to go to seed. Oh, yes, they also spread by seed. I told you they were evil.

You can also try smothering creeping bellflower, as you would other weeds, by using the lasagna method. I’ve talked about this in the past and you can find detailed instructions here on my blog. Basically, you just cut the bellflower back and cover the area with layers of overlapping sheets of newspaper topped with soil and mulch. After a couple of months, you’ll have killed at least some of the horrid things by depriving them of light. Of course, you’ll also kill other things in the area, as well. So this won’t work if the bellflower is interspersed throughout your gardens rather than heavily concentrated in certain spots.

To deal with small patches of bellflower in the garden, try using a modified version of the lasagna method by covering only the bellflower with strips of newspaper, soil and mulch. This way, the other plants won’t be affected by the smothering, and if the newspaper is covered with mulch or compost or whatever you want to use, no one will even know you’re murdering something out there in the flowerbed. I use this strategy in my perennial gardens all the time and it works very well to help keep weeds at bay.

Got more weeds you want to kill? Of course you do. For help dealing with many common lawn and garden weeds, check out the University of Minnesota Extension website.